I have just returned from a holiday in a well-known wine-growing region of France, but that is not why I am enthusiastic about vine-work. Rather, it is because I have just finished reading The Trellis and the Vine. 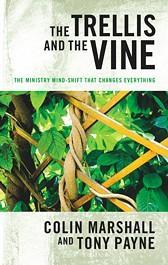 The Trellis and the Vine: The Ministry Mind-Shift That Changes Everything

Others are far more able to give comprehensive reviews than I am, but a few summary observations:

I was also profoundly thankful for the way in which some of these principles have been modelled and taught to me as I have worked in various churches. I can still hear a former colleague encouraging me to “Feed the hungry” which is a very T&V injunction. I am thankful for the gospel-heartedness of the church where I was an apprentice who not only invested in me for the 4 years I was with them, but were prepared to contribute towards the funding of my training even though I was heading into ministry in a different denomination. And of course, I am thankful for my current minister who encouraged me to read the book.